The Pearlman TM 1 Microphone was designed by and is hand made by Dave Pearlman of ROTUND RASCAL RECORDING STUDIO. It is a high-quality microphone made for professional studio use but priced for the home recordist. Many studios using digital recording, (Pro Tools, etc.), need a front end system to warm up their recordings. All Pearlman microphones include power supply, cable, shock mount, and aluminum case.  NO GMOs.

A large-diaphragm, 6 micron, gold-sputtered capsule sends the incoming signal to a New Old Stock EF80 tube (electrically identical, except for the heater voltage, to the very expensive Telefunken VF14 used in the famous Neumann U47) to the hand-wired circuit which includes selected WIMA polypropylene coupling capacitors to a state of the art output transformer custom-designed (to match the European Tube output impedance) by the wonderful folks at CINEMAG Transformers in Los Angeles.

This is NOT an assembly line microphone; each unit is hand-wired, point to point, and voltage tuned for maximum performance. The microphones were originally built to fill the need for more high-quality tube microphones and are now in demand by everyone who has heard them.

If you’re looking for a tube microphone with characteristics similar to the venerable Neumann U47 but at a tenth of the cost, then you will love this mic!

“I’m pretty particular when selecting microphones for recording different sources. I found the Pearlman TM 1 more versatile than other large capsule tube microphones I’ve used in the past. When recording acoustic guitars, I usually go with a small capsule mic such as a AKG C-451, a DPA 4011 or a Schoeps CCM4 L ST100. One time I tried the TM 1 on acoustic just for a change. I was surprised how clear it sounded and also how insensitive it was to my player’s movements in and around the front of the mic. I also liked that all the sound of the guitar was captured by the TM 1 even though I was a little close in at about ten inches above the 12th fret. On vocals is where the TM 1 hits its stride. Female or male vocals sound big and full even on singers with a strident-sounding upper vocal range. With obvious comparisons to the famed Neumann U47, the TM 1 is a first class instrument that is my “go to,” first choice when recording lead vocals. I’m keeping mine forever!” 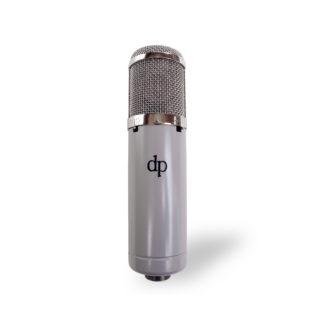